OUR RESPONSIBILITY IN THE COVID-19 PANDEMIC

The turbulent year 2020 has focused our attention on ensuring the safety of our employees and supporting our media recipients, customers and business partners. 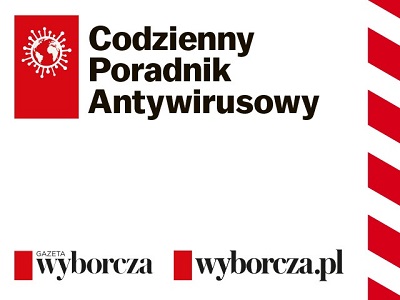 In 2020, the editors of Gazeta Wyborcza and Wysokie Obcasy have been actively involved in the aid and information campaigns related to coronavirus, among others by supporting local entrepreneurs, such as the “Solidarity 2020. Send Some Support” („Solidarni 2020. Prześlij trochę wsparcia”) which the editorial board of the daily launched with the Booksy app; cooperation with renown law firms to help their readers who had doubts about how to interpret the regulations related to government anti-crisis assistance.

In addition, it was important to provide accurate information on the pandemic and various aspects of everyday life, health and work, which have changed as a result of the lockdown. For this purpose, the “Daily Antiviral Guide” („Codzienny Poradnik Antywirusowy”) and “Daily Anti-Crisis Guide – Work, Health, Money” („Codzienny Poradnik Antykryzysowy – Praca, Zdrowie, Pieniądze”), i.e. special cycles which appeared everyday in the paper and digital editions of Gazeta Wyborcza were created.

In addition, due to the closure of educational institutions during the coronavirus epidemic, the editors of Wyborcza.pl prepared a special educational website with interesting texts and video collections, among others. in history, physics, biology and chemistry as well as materials for high school graduates and eighth graders preparing for exams. 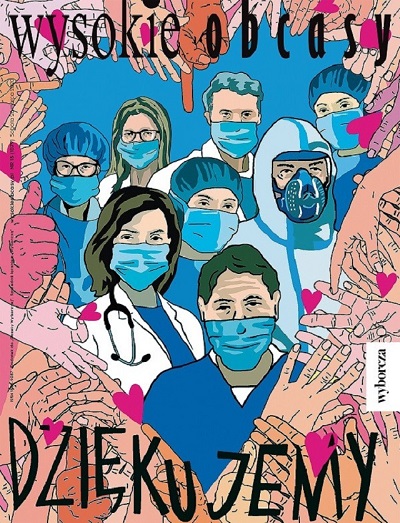 In a symbolic gesture of thanking the medics for fighting the pandemic on the first front in March 2020, on one of the covers of the issue of Wysokie Obcasy a unique drawing by illustrator Marta Frej appeared. In this way, the editors encouraged everyone who would like to express their gratitude to the medical service to stick this cover on the window, car window or share it on social media. The poster can be downloaded here.

In April, Wysokie Obcasy and Gazeta Wyborcza in cooperation with the Kulczyk Foundation launched a social campaign called “Tenderness and freedom. Let's build a balance in relationships” („Czułość i wolność. Budujmy równowagę w relacjach”), the aim of which was to support readers in surviving the difficult time of the pandemic and to provide ideas and reflection on how to prepare yourself and your loved ones for life in the world “after the coronavirus”. Another initiative aimed at supporting the readers in coping with reality during the pandemic was the special action “Superheroes save us” („Superbohaterki ratują nas”). To this end, the editors invited the participants of the “Superhero of Wysokie Obcasy” („Superbohaterka Wysokich Obcasów”) plebiscite – activists, stars of the stage, science and business to participate in the initiative. In a series of videos published on Instagram of Wysokie Obcasy they told, among other things, how to cope with quarantine or look for joy and strength in moments of doubt.

As part of the aid initiative in response to the situation caused by the coronavirus, Agora Publishing House in cooperation with Gazeta.pl and Wyborcza.pl from March to May 2020 conducted a series of cultural events in social media under the slogan #Culturalsphere (#Kulturalnastrefa), organizing concerts and meetings with artists who due to the pandemic, they had to suspend their activities.

The greatest activity for the benefit of those affected by the COVID-19 pandemic, initiated by Agora Publishing House, is a unique charity campaign by Agora and its media brands called “Hope”, about which more information is provided below. 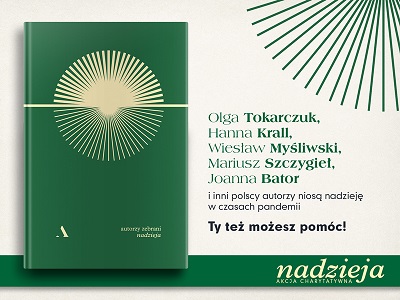 From May 2020, the Agora Publishing House together with the Agora Foundation was involved in the unique charity campaign under the name “Hope”. As part of this initiative, the publishing house has published a book of the same title in cooperation with 40 prominent Polish writers and poets, incl. Olga Tokarczyk, Wiesław Myśliwski and Mariusz Szczygł. The entire income from the sale of the issue was allocated to helping hospices and social welfare centers for seniors and people with intellectual disabilities, who, especially during the pandemic, did not receive sufficient support from the state and are struggling with, among others, with a lack of staff, equipment, masks, as well as basic necessities.

On the day of the presale announcement, on May 22, all the media and brands of the Agora Group involved in the campaign as a sign of support for the initiative, changed their logos by adding a green color – referring to the colors of the “Hope” campaign logotype.

In July 2020, musicians also joined the action by creating the song “Hope All Stars – Over the Rainbow”. All people involved in the campaign and the creation of the book worked for charity.

As part of the project, employees of the Commissioner for Human Rights and the Agora Foundation made several hundred phone calls to selected centers from May to September in order to conduct in-depth interviews. Then 58 centers were selected from the database of over 460 centers. Each of the centers defined a priority list of needs, the costs of which were covered from the account, to which Agora Publishing House transferred funds obtained from the sale of the book “Hope”. In July 2020, the Biedronka network joined the group of donors in the action, which donated PLN 1,062,038 to support seniors. In total, over PLN 1.5 million was collected under the initiative in 2020.

The organizers donated the entire income from the sale of the book to help 58 social welfare centers and hospices. The obtained funds were used to purchase, among others, personal protective equipment, chemicals and disinfection products, it was also possible to buy hot meals, increase the number of hours of psychologist and psychotherapists' care, or equip 2 rehabilitation rooms. 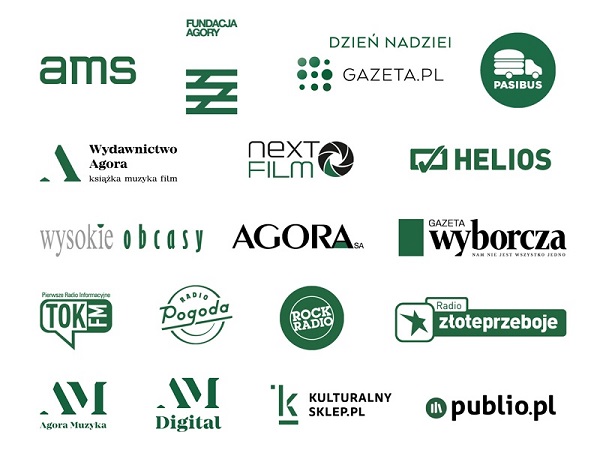 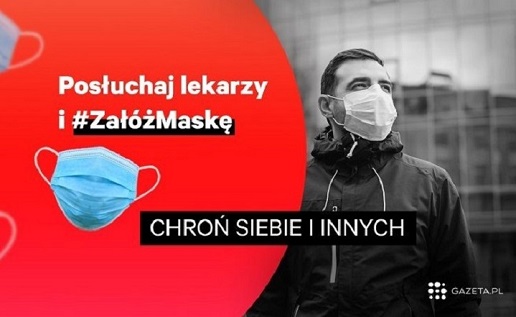 Shortly after the outbreak of the coronavirus pandemic in Poland, Gazeta.pl initiated the #Putthemask (#ZałóżMaskę) campaign, in which the editorial office encouraged everyone to wear masks, including by publishing articles by the editorial office of Zdrowie.Gazeta.pl. Readers could learn from them, for example, what the properties of the masks are, how to make protective masks themselves, how to properly wear them, wash and dispose of them. On its Facebook profile, Gazeta.pl also made available an overlay for a profile photo prepared especially for this occasion.

In addition, the portal team in April 2020 collected funds for the purchase of a respirator for a hospital in Sucha Beskidzka under the slogan #Webuyarespirator (#KupujemyRespirator). Almost PLN 145 000 was collected as part of the campaign (15 000 more than the collection target).

During the pandemic, the Gazeta.pl team also undertook other actions for their readers, concerning their problems. These were, among others Another #Koronanewsletter (Inny #Koronanewsletter) sent once a week with publications on other important issues, or a series of articles #Businessisfighting (#Bizneswalczy) of the Next.Gazeta.pl website, where you could learn about the problems of entrepreneurs and their ideas for fighting the economic crisis caused by the pandemic. 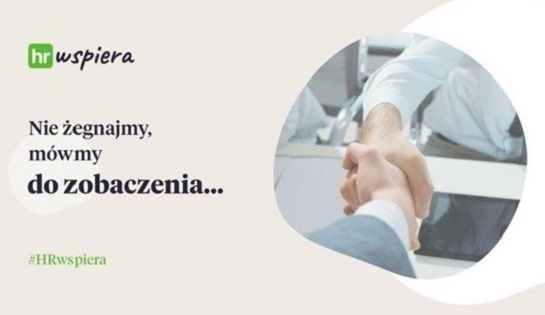 HRlink from Agora's capital group together with partners from the HR industry launched a unique project in April 2020 aimed at people, companies and institutions affected by the current crisis. #HRsupport (#HRwspiera) was an action that combined technological and psychological support, proposing concrete actions and real help to dismissed employees, companies reducing employment and those that still recruit employees – mainly online. The HRlink platform included, among others tools for people with a notice who are looking for a new job, and companies could take advantage of a series of free online events – conferences and webinars. As part of the project, in July 2020, a comprehensive set of outplacement advice and solutions was published in the form of an e-book. This is a company's proposal for entrepreneurs, prepared by experts on the basis of experience and webinars taking place from April 2020.

During the lockdown, the radio stations of the Agora Radio Group organised a number of support campaigns for seniors and medical workers, such as e.g. “Shopping Rescue” („Zakupowe Pogotowie”) of Radio Pogoda, media support of Rock Radio for the campaign #We help hospitals! (#Pomagamyszpitalom!) and cash collection for meals for medical personnel. All music radio stations of Agora Radio Group also encouraged listeners to stay at home for their own safety and for the safety of their loved ones in the campaign entitled #I love therefore I don't visit (#KochamNieOdwiedzam). 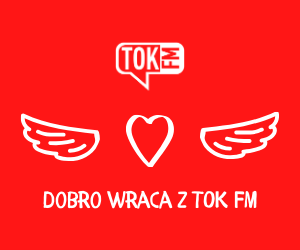 Since the beginning of the coronavirus pandemic in Poland Radio TOK FM has broadcast special programs and podcasts to provide the audience with accurate and verified information about the current situation in Poland and worldwide. In addition, in June the radio station organised a plebiscite called “The Good Comes Back with TOK FM” („Dobro wraca z TOK FM”) in which they distinguished people supporting others during the fight against the coronavirus – healthcare workers, but also others demonstrating an altruistic attitude towards people. 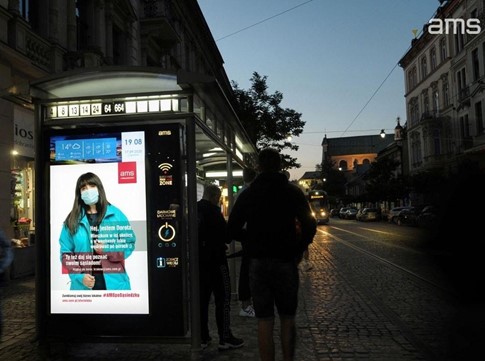 Faced with the pandemic and in view of its serious impact on many areas of life, AMS has committed itself to numerous social campaigns. These included, among others, creating offers to support businesses and entrepreneurs, and building a community during the fight against the effects of the COVID-19 pandemic. One of them was the #AMSnextdoor (#AMSpoSąsiedzku) initiative, aimed at local entrepreneurs, to encourage them to take advantage of the company's dedicated offer and to help them promote their products and services during the pandemic. In these difficult times, also the cultural sector was targeted with a campaign from AMS called #AMSsupportsculture (#AMSwspieraKulturę), thanks to which cultural institutions, such as theatres, museums, cinemas, publishing houses or opera, could benefit from promotional terms of cooperation. A similar offer was made to public benefit organisations as part of the initiative #AMSItisworthtohelp (#AMSwartoPomagać).

During the pandemic, AMS has also supported the inhabitants of the towns with campaigns, such as “If you see this poster, it means you could not stay at home” („Jeśli widzisz ten plakat, to znaczy, że nie mogłeś zostać w domu”) which reminded of the most important rules of conduct during the pandemic, or #SendingLove which was displayed on DOOH media all over the world and contained a positive message in these difficult times. An important project was also the social campaign prepared for medical workers – “Thank you healthcare service” („Dziękujemy #sluzbazdrowia”). 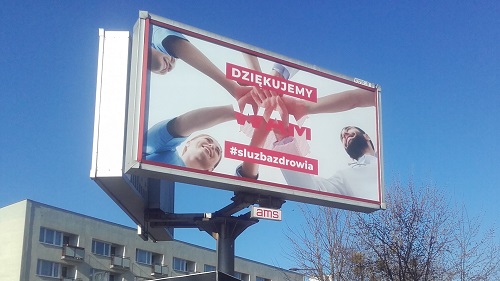 Top
Dear User!
We want you to be comfortable while using our website. This is why, we try to match the available content to your interests and preferences. This is possible due to the storage of cookies in your browser and the processing by Agora S.A. (the administrator) of your personal data for analytical and statistical purposes. By continuing to use our website, without changing the privacy settings, you agree to the storage of cookies in your browser. Please remember that you can always change the settings of cookies in your browser as well as obtain additional information about the processing of your personal data and your rights from our  Privacy Policy.
Privacy settings
I agree